The New Way To Get Around

Download on the App Store and Play Store Today!

Every business begins with a series of small ideas that are combined into an all inclusive one. At VIA, we want to change how consumers see the concept of Island travel by offering a simple and user-friendly platform they can trust. Our team of incredibly bright minded individuals have dedicated an immense amount of time and effort to ensure that your ride experience is easier and better than ever.

Learn About the Advantages that VIA Has to Offer

We believe that our service is smoother, modern and cutting edge. We also believe that this is the latest technology which is un-matched on the Isle of Man for ride bookings. We believe in a good, friendly service from our drivers at great rates for the users.

You can pay with cash or card, your stored card details can be used to pay for a trip which is processed on the app, saving you hassle and the receipt is available on the app. 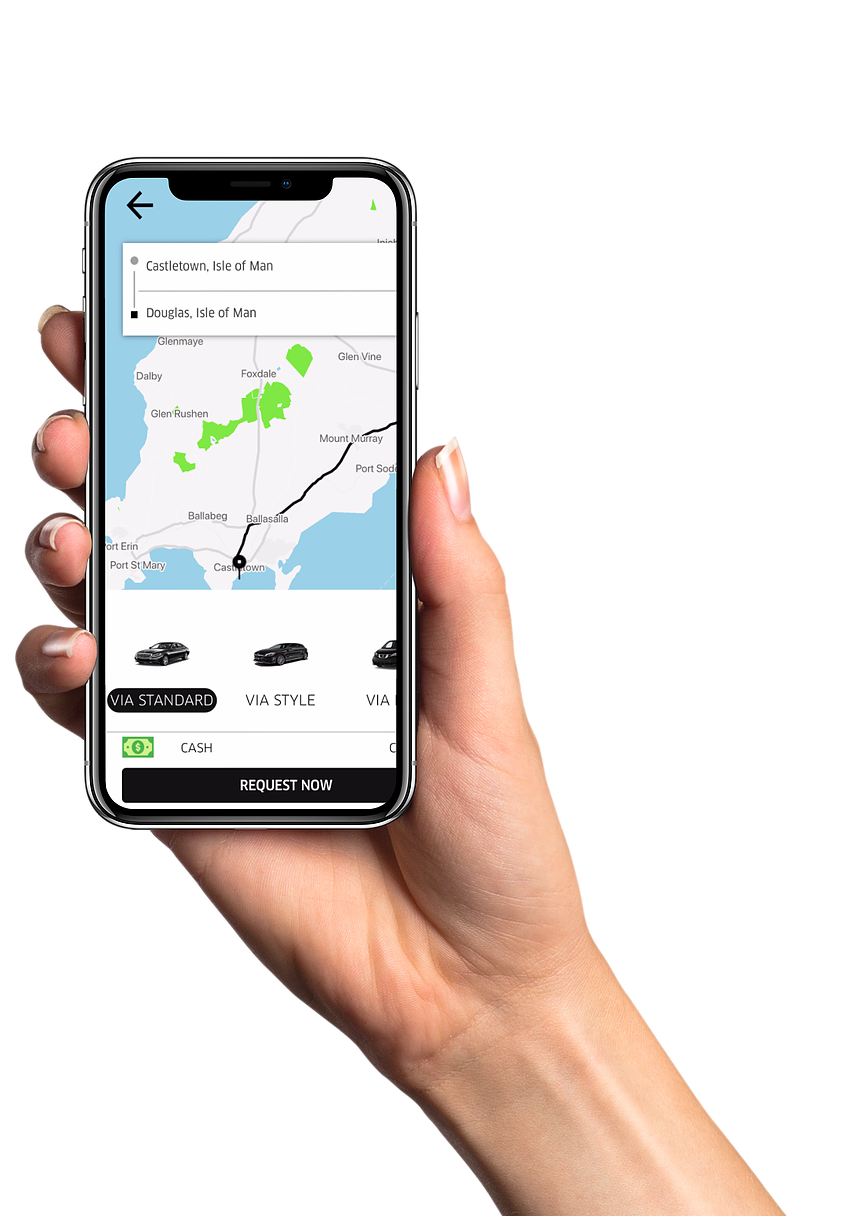 Read the story behind VIA

VIA has been over two years in the making — from initial concept and design, to development and launch. It's 21 year old creator, Jake Murtagh, believes it will revolutionise the way in which people order and use private hire vehicles: “The idea came about after I took a cab from Douglas to Peel (10 miles) a couple of years ago. The driver didn't interact with me in any way for the entire journey and then charged me £40 for the privilege.” Jake, just seventeen at the time, thought that there had to be a better way and, on the advice of his family, began to draw up a comprehensive business plan. Remarkably, Jake fully committed himself to the project, whilst remaining in full time education to complete his A—levels: “It has not always been a smooth journey, in fact I have been presented with a number of challenges along the way explained Jake. “I had to teach myself how to build an App, and then there were setbacks when UK payment processors and server holders wouldn‘t deal With the Isle of Man.

However, didn’t let this get in the way and gradually worked through each problem, overcoming them all one by one." So what is VIA? The new App which will be available on both Android and IOS devices, offers an extraordinarily well thought—out and user-friendly process to registered users and drivers of private hire vehicles across the Isle of Man. When looking to book a car for their journey, passengers first select their choice of vehicle Ie. a standard car, executive car etc. VIA will then provide clear GPS based graphics to inform the user of the position of the nearest available vehicle, the expected time of arrival and the cost of the journey. Throughout the journey, drivers will be provided ‘turn by turn' directions via GPS and will be committed to taking the shortest route available. Whilst, at first glance, the process is not unlike that of other App based service providers, VIA has been specifically designed to meet the unique requirements of the Isle of Man, although it can also be rolled out to virtually any other jurisdiction.

“Within VIA, drivers and passengers are subject to a rating system", explained Jake “This means that any driver who provides a poor service in terms of manners or cleanliness of their car etc., or a passenger who is rude or threatening in any way, can be given a bad rating which could resulting them being excluded from the App thereafter. " The App also features an emergency button which allows the user to immediately call 999: “Safety is a real concern of mine." explained Jake, “With that in mind, another feature of VIA is the ability for users to purchase pre—paid bundles using an online ‘wallet'. This will allow parents to ensure that their offspring can be sure of a safe, pre—paid journey home, should they be tempted to spend their taxi money on other things!" Currently there are already a large number of private hire and ply for hire drivers on the Isle of Man. Jake envisages more new drivers going down the private hire route. giving them access to additional income and the freedom to work as and when they choose. Drivers with VIA will be paid using a simple commission system and would need to make no further commitment. "We are very excited about VIA and feel confident that it' will have wide appeal — particularly among younger people. Follow our social media channels for the information on the App‘s launch," concluded Jake.

IT ALL SOUNDS GREAT, BUT WHAT DOES THIS APP ACTUALLY DO?

The App is a platform for the Manx public to order a ride that is reliable, easier and at competitive rates.

We believe that our service is smoother, modern and cutting edge. We also believe that this is the latest technology
which is un-matched on the Isle of Man for ride bookings. We believe in a good, friendly service from our drivers
at great rates for the users.

HOW CAN I PAY FOR MY VIA RIDE?

You can pay with cash or card, card payments are processed through the app at the end of a trip, saving you hassle and the receipt is available on the app.